Something is happening in the UK.

With 90 days to go before general elections in the United Kingdom, the Green Party of England and Wales' membership numbers have been growing at an unprecedented, exponential pace.

Green Party membership which was at 13,809 at the end of 2013 jumped to 30,809 by the end of 2014, and is now over 50,000 - now believed to have overtaken the Liberal Democrats and the UK Independence Party (UKIP) as the third largest national party by membership in the UK. 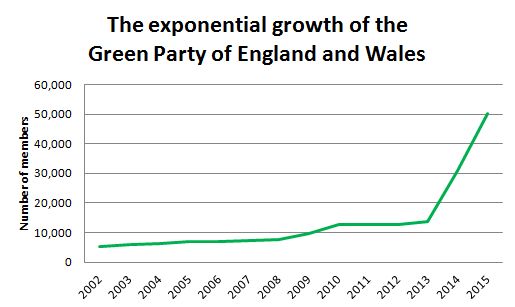 Earlier in January, the British broadcast regulator Ofcom touched off a furor when it designated the Green Party not to be large enough to merit participation in the televised leaders debates, while recommending that the upstart UKIP - a party with two seats in the 650-member British Parliament - be included.

After the Conservative Prime Minister refused to participate and the Green Party delivered a petition with 275,000 signatures on it, some broadcasters offered to organize a debate with the Green Party included.

Both Conservative and Labour are stuck in the low 30% range, with over 33% of the electorate opting not to back either Party. UKIP is hovering in the mid to high teens, but is down from the 26.6% it achieved in the 2014 European election. There are 99 days to the May 7, 2015 election, and this week the Conservative-Liberal government backed away from its previous wholehearted embrace of fracking.

The spike in national Green Party membership numbers comes at the feet of a surge of Green electoral success in local elections throughout the UK in May 2014. Greens picked up an additional 23 local council seats in those elections, bringing its total up to 162 councilors on 56 councils. Voters are joining the Green Party in part because of the practical solutions being put forward by elected local government officials, such as the one partially passed at the Herefordshire Council last month:

This Council resolves that the Head of Paid Services be requested to report to the Employment Panel and Council how to achieve the following outcomes:

1. Introduce the living wage (£7.85/hr) into our pay policy in place of the inadequate minimum wage.

2. Establish a 1:10 differential between our highest and lowest paid employees.

3. Once we are setting a good example to the rest of the County, encourage other employers to follow our example with these measures, especially those who are under contract to Herefordshire Council.

A majority supported introduction of a living wage for the lowest paid employees, which is one of five themes that the Green Party is running on in local and national elections:

-By Andy Shadrack and Jordan Bober