Time to address derelict and abandoned vessels and marine sites 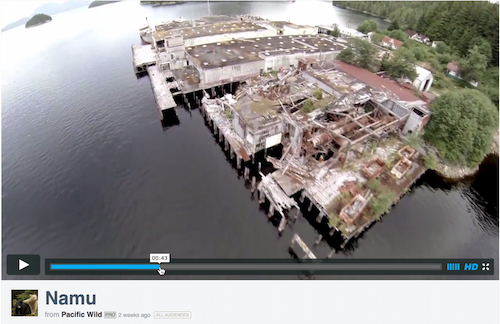 For years British Columbians and Canadians have demanded that our governments do something about marine waste. The fish cannery in Namu, BC is the latest of many slow-moving environmental disasters. The Chilcotin Princess, a large ship moored to the decaying former BC Packers facility is dangerously close to sinking and adding to the mess.

As a former councillor for the seaside District of Central Saanich, I have thought extensively about this issue. I have met with Ministers, bureaucrats, and front line government workers at the municipal, provincial and federal levels. I have muddled through the complex web of multi-jurisdictional red tape, and I am encouraged with the work done to date because it offers solutions to successfully addressing derelict and abandoned vessels and marine facilities.

A report called Dealing with Problem Vessels and Structures in B.C. Waters was released in September 2014 by the Ministry of Forests, Lands and Natural Resource Operations (FLNR) and it plainly states, “Often, there is no simple answer to the question: Who should be dealing with this problem?”

As we have seen with our neighbours in Washington State much can be accomplished by establishing a dedicated office responsible with proactively answering this fundamental question for each case that is brought to their attention. A key advantage is that many of the situations can be addressed before the problems become exacerbated as in the case of the Namu cannery.

At the 2010 Union of BC Municipalities (UBCM), there was a positive meeting with former Minister of FLNR, Pat Bell. A group of local government officials, led by former Chair of Islands Trust Sheila Malcolmson, met with Mr. Bell who offered the best opportunity to actually get something accomplished.

Following the meeting, I believed that he really understood the problems that exist for many communities and regional districts across the province. A short time after meeting with Bell, Premier Gordon Campbell shuffled his Cabinet and replaced Bell with Steve Thomson.

The following year, we met Minister Thomson. We quickly found his approach would not be one of action like his predecessor. Bell was prepared to discuss the issue of derelict and abandoned marine waste – he had ideas about how to address it, he had contacted his federal counterparts ahead of the meeting and he was driving an effort to resolve the multi-jurisdictional quagmire. Under Thomson, progress on the file "lost momentum".

In 2009 while Bell was still Minister of FLNR, a large tug called the Florence Filberg caught fire in Sooke Harbour. The residents, town Council and emergency services could do little more than breathe in the fumes and watch it burn. This was not the first time people had heard of the Florence Filberg; it had been a problem for a long time.

The Florence Filberg was a stark example of the erosion of the province’s stewardship of our coast. Perhaps this incident motivated Mr. Bell into action. Her burned-out hull has long since been towed out of the harbour and is nothing more than a distant memory.

Fast forward nearly six years and responsibility for the Namu cannery has and will continue to increasingly bear on Environment Minister Mary Polak. Recently, the Ministry of Environment seems to have become a crisis manager – a reactionary role to incidents rather than a proactive steward – and as the environmental disaster in Namu deepens, Minister Polak will have no choice but to find a way to clean up Namu cannery.

Minister Thomson has not made these environmental hazards a high enough priority. It has been reported that his Ministry has sent letters to the owners of the Namu cannery, writing letters is not a strong enough action, he has not shown that he values the environment and his lack of action is costing us all money.

Thanks to a coastal organization in the Great Bear Rainforest called Pacific Wild, the pending environmental disaster at Namu has been captured on video. Now we can all see another set of stark images that capture the decay of the cannery and the vessel that threatens the environment, people and Minister Polak’s budget.

To be fair, it is more than provincial inaction that has allowed these sites to rot, as the 2014 provincial government report highlighted. The Federal government has jurisdiction for marine navigation and issues arising on the surface of the water. Despite the appeals of former Member of Parliament for Saanich-Gulf Islands, Gary Lunn, and current Member, Elizabeth May, federal cabinet ministers have also allowed the status quo to continue.

It appears that no ministry at either level of government is willing to take responsibility for setting and enforcing appropriate regulations in regard to these dangerous marine environmental hazards. In the ongoing disintegration of the Namu cannery and the Chilcotin Princess, FLNR’s approach is far too passive and it become further incumbent on the Environment Minister to manage the crisis.

It is long past time for Minister Thomson to roll up his sleeves and solve this problem. Rather than providing local governments and others with a list of federal and provincial contacts, many of whom they have already contacted over the years, he has an opportunity to show leadership on this file.

Section 2.5 of the Technical Staff Guide on Problem Vessels and Structures in British Columbia Waters, provides a clear path to solving these issues through collaboration. The briefing highlights the successes that have been accomplished through a multi-agency approach. Unfortunately, this usually happens at the last possible moment. Minister Thomson can bring it all together.

By creating a fund resourced by a levy on the purchase of marine products and by establishing an office with an annual budget dedicated to identifying priority problem sites and working proactively with property owners, federal and local governments and community volunteers, the province could effectively solve these issues before they become crises that end up costing taxpayers more money in the long-term.

I hope Minister Thomson and his colleagues in Ottawa re-ignite the “momentum” that was lost in the 2011 BC cabinet shuffle, so we can begin the proactive cleanup of sites like Namu.