Join us for the culmination of our gathering in Nanaimo.

Saturday evening is open to everyone. It features a dinner buffet, an exclusive preview screening of Running on Climate, a speech by MLA and Deputy Leader Andrew Weaver and concludes with a pledge auction.

Look back at how Andrew Weaver accomplished what many people wrote off as impossible - the election of a Green candidate to the BC Legislature. He made history for provincial politics in Canada, and has since been followed by the Leader of the New Brunswick Green Party David Coon and the Leader of the PEI Green Party Peter Bevan-Baker.

It’s unusual for a scientist to run for political office. Even more unusual is that Dr. Andrew Weaver of the University of Victoria chose to run for a party that had never won a seat in its 30 year history, the BC Green Party.

Running On Climate follows the indefatigable former rugby player and his dedicated team of grassroots campaigners as they set out to defy the naysayers and take the Oak Bay-Gordon Head seat from sitting cabinet minister Ida Chong, street by street. 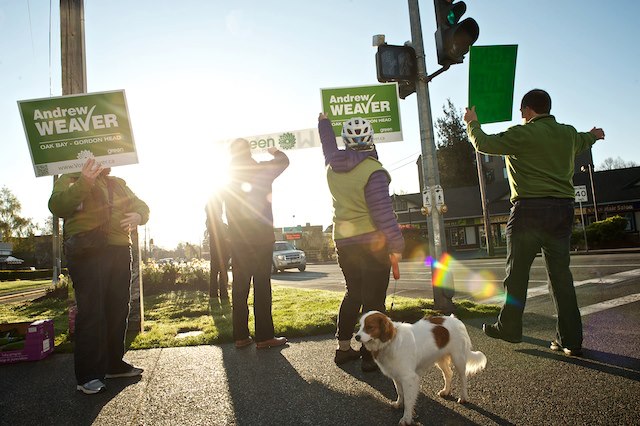 After the screening, we'll turn our sights to the upcoming provincial election. It's less than two years away, and time is running out to stop climate change. The BC Green Party is running to form government to ensure a safe, health and sustainable future for our province.

Andrew will speak to his vision for accomplishing this yet unprecedented and monumental feat. We proved naysayers wrong by electing the first Green MLA to the Legislature. Now we take on an even bolder mission - the election of an entire caucus of Green MLAs who will bring non-partisan, evidence policy to the floor of the Victoria Parliament Buildings.

Registration is required to attend this event. Click the button below to start the registration process. Choose "The Road to 2017" from the registration options on the following screen. Price is $75 and includes dinner.