The Provincial Council is the governing body of the BC Green Party (BCGP). We believe in participatory and grassroots democracy and  welcome all members whether new or old to get involved. Members in good standing may apply to provincial council to fill a vacancy between annual general meetings, and may run for any position up for election at each AGM. Most positions are held for 2 years with staggered renewal dates so that there is continuity on the council from year to year.
2014-2015 PROVINCIAL COUNCIL:

Adam Olsen, Interim Leader. Adam was born in Victoria, BC, (1976) and grew up 20 minutes north, on Tsartlip First Nation—the same place he and his wife, Emily, are raising their son Silas, daughter Ella and black lab Fitz.  Adam served as an elected Councillor in the District of Central Saanich from November 2008 - January 2013. He is a consultant, working in the field of First Nations housing and a partner in his family's business, Salish Fusion Knitwear. Adam is a networker, facilitator and fibre artist.

Andrew Weaver, MLA and Deputy Leader.  Dr. Andrew J. Weaver received his B.Sc (Mathematics and Physics) from the University of Victoria in 1983, a Certificate of Advanced Studies in Mathematics (Master of Advanced Study) from Cambridge University in 1984, and a PhD in Applied Mathematics from the University of British Columbia in 1987. He is a Lansdowne Professor and formally a Canada Research Chair in climate modelling and analysis in the School of Earth and Ocean Sciences, University of Victoria. He has authored or coauthored over 200 peer-reviewed papers in climate, meteorology, oceanography, earth science, policy, education and anthropology journals. He was a Lead Author in the United Nations Intergovernmental Panel on Climate Change 2nd, 3rd and 4th scientific assessments and is also a Lead Author in the ongoing 5th scientific assessment. He was the Chief Editor of the Journal of Climate from 2005-2009. Dr. Weaver is a Fellow of the Royal Society of Canada, Canadian Meteorological and Oceanographic Society, the American Meteorological Society and the American Association for the Advancement of Science. In 2013 he was elected as the BC Green Party MLA for Oak Bay-Gordon Head in the provincial election. He presently serves as the Deputy Leader of the BC Green Party

Bob Lorriman, Chair. With a background in transparent and accountable municipal governance, Bob believes we can create a new structural/governance model for the Green Party that respects and recognizes the strengths of our individual members while realizing Party goals. He finds this an exciting time to be part of the BC Green Party team as we work towards achieving official party status (and beyond) in 2017.  The Green Party is a grassroots organization of individuals with shared values, our challenge moving forward is to set and achieve Party goals in a democratic and transparent way that is energized by our ‘bottom-up’ culture. Other political parties are primarily run ‘top-down’ and very autocratic.

Roy Ball, Vice-Chair.  Roy is a mathematician whose career has focused on research in signal processing and machine vision. Roy currently runs a company that develops and exports machine vision based measurement systems worldwide.  Roy has been active with the BC green party for many years in several positions including Party Chair, Organizing Chair and Fundraising Chair.

Kim Darwin, Secretary. Kim was born and raised in BC. Having raised 3 children with her partner in Sechelt, she now has the time to commit to bringing BC Politics back to the people. She was so excited by the BC Green Party’s fact based solutions regarding the environment and economy and the grassroots approach to politics, that she simply wanted to be more involved with Party of the future. After 16 years as a legal secretary, Kim became an independent mortgage broker, operating her home based business. She is also the President of the Sechelt Chamber of Commerce and a 15 year (and counting) student of Chinese, Western and Ayurvedic Herbal Medicine."

Brian Rohl, Treasurer.  Brian was born in Calgary, Alberta and lived most of his life there until moving to Squamish in 2009. Brian was attracted to the Green Party of BC as a responsible, sustainable and fresh political option for BC.  Brian’s has enjoyed a successful career in the hospitality industry and has worked with Sheraton, Westin, Fairmont and Coast Hotels.  Having over 15-years of progressive senior leadership experience, including the last 5 years at the executive level, Brian has been exposed and successfully navigated a variety of complex organizational situations.  This experience has provided him with a valuable toolkit to apply to all opportunities and strategies.  He recently received his MBA from the University of Guelph.

Bill Masse, Policy Chair.  Bill Masse has a B.A. in Economics at Simon Fraser University. He is retired after working 30 years at the Department of Fisheries and Oceans. He started as an economist and then held a number of management positions, mostly in recreational and aboriginal fisheries. The last 12 years of his career at DFO he worked on treaty negotiations with First Nations as a policy analyst and a fisheries negotiator. When he retired he was Senior Fisheries Negotiator for British Columbia treaty negotiations. Since retirement he has been studying political science at Kwantlen Polytechnic University.  Bill is 66 years old and lives in Langley with his wife Kathy. They have 6 children and 10 grand children. They enjoy travelling to exotic locations. They love the outdoors and have a number of favorite camping spots around B.C. Bill plays tuba in the Langley Concert Band.

Jordana Dhahan, Councillor-at-Large.  Jordana Dhahan is a personal injury and employment lawyer with Dhahan Law in Metro Vancouver. She devotes part of her practice to clients with financial need, facing constitutional rights issues or engaging in socially progressive, alternative or green activities. After graduating from the University of British Columbia Faculty of Law with an LLB, she articled at a downtown Vancouver law firm and then commenced her career as a lawyer at a boutique personal injury firm before starting her own firm. She is a member of Mensa Canada and Golden Key International Honour Society. Jordana also studies permaculture, practices yoga and plays piano.

Rita Fromholt, Councillor-at-Large, Chair Fundraising.  Rita has devoted most of the past 20 years working and volunteering to advance environmental and social justice issues in BC, and has played lead roles on a number of high profile political campaigns. She holds a BA in Communications (SFU), and an Accounting Technologist Diploma (CMA) and has taken many professional development programs including being an Al Gore certified Climate Leader.  She currently chairs to the BC Green Party Fundraising Committee and is chair of the Esquimalt-Royal Roads Constituency Association  A long-time political junkie, Rita is passionate about seeing great people, supported by strong parties, get elected to government. After many years working with non-profits, she now views political activism as the key to transitioning to a more sustainable and just society.

Jessica McIlroy, Councillor-at-Large, Chair Strategic Planning.  Jessica McIlroy comes to Provincial Council with an impressive array of experiences that include founding and serving as Executive Director of the BC Women in Energy Network (BC WEN). Jessica has worked in the energy and sustainability sector since 2004, as part of the formation of the Ocean Renewable Energy Group and their Pacific Director until 2012, Program Manager of the Cool Neighbourhoods community energy efficiency and conservation with the Cool North Shore Society, and through various government and industry consulting work. In 2012, Jessica began working in other areas of sustainability, such as the garment and textile industry, and holds the volunteer position of Chief Awareness Officer with Vancouver Eco Fashion Week.  Jessica holds a BSc in Environmental Biology from Simon Fraser University, an MSc in Environmental Sustainability from the University of Edinburgh, and an MBA in Executive Management from Royal Roads University. She has also completed a certificate in Climate Change Decision Making through UBC, and has participated in leadership and training programs with the likes of Al Gore. Jessica also currently sits on the Board of Directors of the BC Sustainable Energy Association and Marine Renewables Canada. Most recently Jessica worked as Member Services Manager with the Canadian Passive House Institute West

Wyatt Tessari, Regional Representative - Burnaby/Tri-cities/New Westminster. Wyatt is a former candidate and regional campaign coordinator in Burnaby. Originally from B.C., he holds a B.Eng in mechanical engineering from the University of Montreal and a certificate in filmmaking from the New York Film Academy. Much of his childhood was spent in Europe, where he learned to adapt to new cultures and overcome language barriers, and he has since moved back home to the West Coast to build his life and career.

Aird Flavelle, Regional Representative - Fraser Valley. Aird is a former candidate with deep and diverse roots in his community. In addition to his role as a businessman and employer, Aird is a long-time community booster and a passionate community volunteer.

Tessa Perkins, Regional Representative - Surrey. Tessa Perkins is a writer currently working at SFU's Beedie School of Business. She is passionate about the arts, the environment, and making a difference. She is a green because she wants to look forward to the future with hope instead of fear

Noel Muller, Regional Representative - North Shore. Noel was the Campaign Manager for Powell River - Sunshine Coast in the May 2013 General Election.  He holds a BA in Economics and Geography from University of British Columbia and was active in student politics.  He lead the UBC 'National Model UN' team to participate in the worlds largest simulation at the United Nation Headquarters in New York USA.

Nicole Charlwood, Regional Representative - Kootenays-Columbia. Nicole was the Campaign Manager in Nelson-Creston for the May 2013 election. She is a trained IT project manager and currently works from home managing a guest house and homeschooling her two young children in rural Nelson. Originally Nicole hails from Toronto, Ontario and received her Honours Bachelor of Economics & International Trade Coop degree from the University of Waterloo. 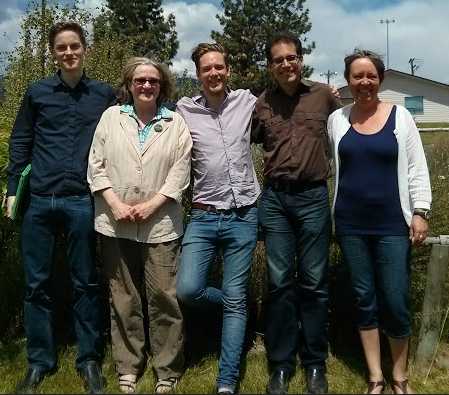 Mayo McDonough, Acting Executive Director. Mayo was the BC Green Party Candidate for Nanaimo – North Cowichan in the 2013 election and received 13.73% of the vote (3430 votes); but she prefers the Student Vote results as the students elected her in their vote!  Mayo was born in Kirkland Lake, Northern Ontario and at 14, moved to Orillia Ontario.  She received her BASc at the University of Guelph and her MBA at McMaster University in Ontario.  Mayo worked in marketing for 3 international companies: New England Business Systems, Moore Business Forms and Inmac Datacom products, based in the greater Toronto area, before moving west in 1989.  In Victoria, She has operated a Communications Consulting Business and held the positions of Executive Director BC WorkInfoNet and Executive Director Better Business Bureau.