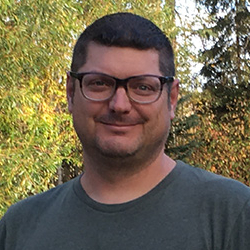 As per the BC Green Party’s bylaws, only members who live in the North region may vote for the Regional Councillor-at-Large - North. To learn more about this region, please click here.

I am eager to put the experience and connections I have made in the North while serving in local government to work for the provincial council so we can have both a rural and northern perspective on the board.

Do you support Phil Brienesse? Tell your friends!
Tweet

Phil was born in Ontario and moved to BC in 1995. He has been interested in politics since high school when an English teacher sparked his interest in current affairs. When Phil moved to Smithers, BC he became involved in local politics serving as a volunteer on various town committees. Phil ran for the federal Green Party in the Skeena – Bulkley Valley riding in 2006. After that, he focused on local politics and was elected as a Councillor for the Town of Smithers from 2011 to 2018. During his time as councillor, he was fortunate enough to be elected as a director at large for the Union of BC Municipalities and served on the board for 4 years.

In Phil's work-life he has worked in the ski industry, retail management, food and beverage management, winery sales rep, northwest region apiary inspector and most recently owns his own business as a web developer. Several years ago Phil and his wife Erin helped their daughter learn about business by starting up her own egg business. With their help, she maintains a flock of 100 chickens and sells eggs at the local health food store. Phil has also been a beekeeper for the last 15 years selling honey and bees.

In his personal time, Phil enjoys the outdoors including cross country skiing, snowboarding, hunting, fishing and camping. Phil and his family have a large garden and enjoy preserving foods and cooking. Phil and his daughter also perform with the local Valley Youth Fiddlers group.

Do you support Phil Brienesse? Tell your friends!
Tweet