Olsen speaks at Food for our Future: Family Day Rally 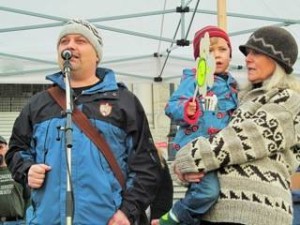 Olsen spoke passionately at the event, acknowledging there was a time that our land and oceans provided all the food for people in British Columbia. He emphasized food security is a non-partisan issue, “we all eat!” he said.

The BC Greens thank the Farmland Protection Coalition for organizing the event and for their passion for BC agriculture. Contact them to get involved.

I would like to acknowledge and thank my relatives of the Songhees and Esquimalt First Nations. I stand with you today as the Leader of the BC Green Party with my mother and my son. We stand with you in our fight for the future of agriculture in British Columbia.

In late January, Agriculture Minister Pat Pimm finally responded to my open letter to Premier Christy Clark. In that letter we learned our government is changing the mandate of the ALC! Apparently BC’s new approach will be to protect only our most productive farmland!

Of course the mandate of the ALC is not to protect the most productive farmland, but to protect and enhance all the farmland in the Agricultural Land Reserve.

This language is irresponsible. Evolving the mandate of the ALC to only protect the most productive farmland is dangerous, short sighted and frankly a disturbing sign of desperation by our provincial government.

Clearly our government has gone all in on LNG, and they have doubled-down. The BC government is prepared to sacrifice food-producing land for Site C and thousands of natural gas wells needed to just maintain our current supply. They promised on several occasions public input on potential changes to the ALC and have since backed down… clearly they are concerned that British Columbians are not prepared to bet the future of our food supply against their LNG pipe dream.

Premier Clark, we do want economic security… but not at the cost of food security! British Columbians want security and we feel it slipping away from us daily.

Premier Clark, British Columbians want the ability to feed ourselves we want a future that we can feed our children. It is not in our interest to rely on increasingly fragile food imports.

Premier Clark we call on you to commit to the modernization process that resulted from the 2010 ALC review and Auditor General’s report, the same process your government invested in last year.

Food is a non-partisan issue and we stand with all British Columbians, Premier Clark we demand your government re-commit to the ALC, strengthen the ALR, and ensure our children and grandchildren have the ability to feed themselves.