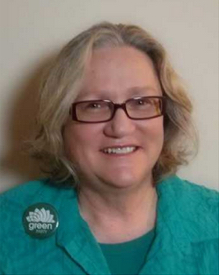 Bio: Mayo received her BASc at the University of Guelph and her MBA at McMaster University in Ontario. She worked in communications and marketing for 3 international companies, New England Business Systems, Moore Business Forms and Inmac Datacom products in the greater Toronto area, before moving west in 1989. In Victoria, she has operated a Communications Consulting Business and held the positions of Executive Director for BC WorkInfoNet and Executive Director for Better Business Bureau. Mayo also served as the BC Green Party candidate for Nanaimo-North Cowichan in the 2013 provincial election, garnering 14% of the vote. Following the provincial election, Mayo was elected to the party’s Provincial Council and took on the role of Deputy Financial Agent. For the past year, she has brought her business acumen to the party as volunteer Acting Executive Director of the BC Green Party.

Until recently, I never considered myself very political. Despite having strong feelings about our government’s policies and practices, I had little time for it. It was my friend and colleague Andrew Weaver who convinced me that I needed to put my sentiments into action. Andrew served as an example in this regard for me, leaving his work as a climate scientist so that he could affect change from within government as an MLA. I decided to offer myself as a candidate for the 2013 election, and found a happy home among the Greens. After the election, my role as Deputy Financial Agent added significant depth to the political experience I had received as a candidate. I developed not only a stronger attachment to the BC Green Party, but an emphatic vision for the party’s future in provincial politics. That is why I decided to take on the role of volunteer Acting Executive Director. Together with the Provincial Council and staff, I have been able to chart out and enact a strategic transformation for the party that will take us to electoral success in 2017 and beyond. During my tenure, we have moved the party from financial danger to unprecedented fiscal growth, added several new staff members, and opened a permanent headquarters in Victoria. With the day-to-day operation of the party in the hands of capable and paid staff, I look forward to great achievements and successes to which I can contribute as a Provincial Councillor once again. I will continue to work toward the strategic implementation of our goals for 2017, helping us achieve electoral success and a hopeful future for our province in the next general election. Thank you for supporting my candidacy to become a Member-at-Large on our party’s Provincial Council.