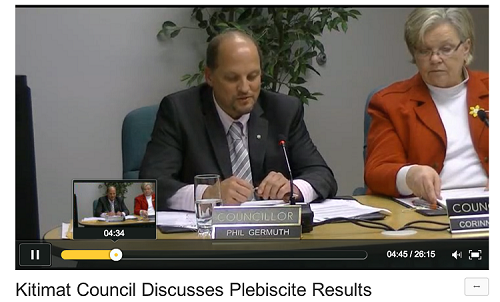 Well done Kitimat residents, Mayor and Council! Your plebiscite on the Northern Gateway pipeline project and the response from your leadership highlighted a positive example of democracy in action. You have inspired people across the province and country!

On Monday night, all eyes were on Kitimat as Council thoughtfully discussed the impact of the results of the April 12th plebiscite – 58% of residents voted against the project. Fortunately the Council built on the foundation established by a strong majority of Kitimatians.

First, Council unanimously supported a motion to forward the plebiscite results to the federal government. Then each took an opportunity to acknowledge their general support for pipelines, but none supported Northern Gateway and in particular each expressed their opposition to exporting raw bitumen.

Councillor Phil Germuth put it about as succinctly as one can, “This project does not have social license to proceed,” he said.

Germuth highlighted support for various heavy industrial developments in Kitimat and summed up the discussion about Northern Gateway pretty well,

“The Enbridge project is clearly in a class by itself, in that the risk versus the benefit is just way too high and clearly the people have told us that. I also believe that the plebiscite shows that neutrality that this Council has taken is not justified and not needed anymore.”

Each Councillor took a turn to calmly and clearly explain their position; much of the content echoed the previous speakers sentiments. After the discussion the following notice of motion was read to be voted on at the next meeting,

“That mayor and council support the result of the April 12th plebiscite, the Haisla and our neighbouring communities by adopting a position of being opposed to the Northern Gateway Enbridge project.”

It will be an interesting week for Kitimat’s leadership. Although the results of the vote are non-binding and the final decision is the federal government’s, all eyes are still on the coastal town.

Will Mayor & Council vote in favour of the notice of motion and continue to be instructed by the results of the plebiscite? Will the town that stands to gain the most financially, also accept the greatest risk? The people have already said no.

With a federal decision on Northern Gateway eminent, this vote in Kitimat sets the tone and the provincial government should pay close attention. If the Canadian government supports the project, Premier Christy Clark will be facing a challenge to similar to the one Kitimat’s leadership stared down on Monday night. It’s not too early to ask, will Premier Clark stand strong on her oft-repeated five conditions or will she break under the pressure?