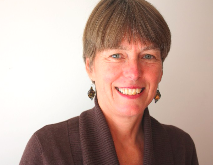 Kim moved to Nelson in 2003 and has been moving the Nelson community forward ever since. Born and raised in Winnipeg, Manitoba, she attended Dalhousie Law School in Halifax, Nova Scotia, where she met and married Greg Brewer. Kim practiced law briefly before taking time to raise a family. Kim and Greg have two children, both living in Toronto.

Kim joined the Federal Government to work for the Correctional Service of Canada in Abbotsford and later Human Resources Development Canada in Victoria. They relocated to Nelson when she accepted a management position with Service Canada. Kim’s experience within Federal Government departments has provided her with an insider’s experience of the challenges of meeting a broad range of citizens needs cost effectively.

Kim’s many years of public service have grown into a passion to increase resiliency in our region. She served one term on Nelson City Council (2008-2011) as lead on the development of the City’s Path to 2040 Sustainability Strategy and the Community Energy and Emissions Action Plan (CEEAP). This involved extensive community consultations to create the framework that would shape City Policy and Procedure into our collective future. The Path to 2040 has now been integrated into decision making processes at both Staff and Council levels. Recently Kim has focussed on Food Security. She joined the Nelson Food Cupboard in 2013 and has helped the organization transition beyond providing emergency food bank services, including the development of a 4,000-square-foot garden. See her speaking about the project here.

Kim also works at a regional level, for changes within our public systems. She is Board Chair of the Kootenay and Boundary Food Producers Co-op (KBFPC) formed in 2015 in response to the challenges our local farmers and food producers face. Their vision is to re-create a sustainable, local food economy. Kim brought the founding team of this Co-op together 3 years ago and has lead the group through its development and implementation.

Kim’s wide range of interests since living in Nelson have included: Board of Directors of the West Kootenay EcoSociety, Glacier Gymnastics, and the Centre for Innovative and Entrepreneurial Leadership (CIEL),and Advisory Council for Habondia Society.

With fresh on-the-ground experience in realms that benefit us all, Kim now hopes to represent our rural communities in the BC legislature.