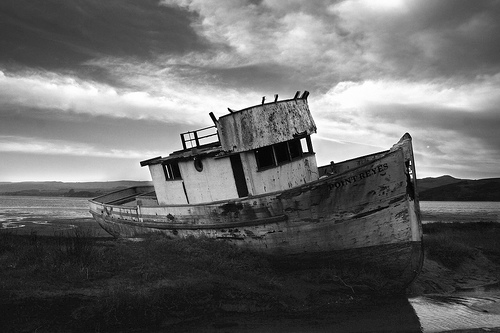 For decades mayors, councillors, trustees and regional directors have passed resolutions at the UBCM asking for senior governments to take care of the derelict & abandoned vessels, illegal mooring buoys and human waste dumping that pollute their local shorelines.

Unfortunately, senior governments have ignored this marine pollution and left cleanup to the local government and regional districts to coordinate, manage and in many cases, finance.

The Northern Gateway and Kinder Morgan pipeline proposals plan to significantly increase heavy oil tankers to Asia and both governments have promised “world-class” oil spill response on land and in the water.

British Columbians are skeptical about this commitment. Stories like the sinking tug near Squamish are regularly in and out of the media reminding folks that nothing has been done. There is nothing “world-class” about the provincial-federal response to marine-based environmental concerns in the past.

A workshop at the 2010 UBCM drew significant attention to the issue. Melissa Ferris, program manager of the Washington State Derelict Vessel Removal Program, successfully illustrated to her Canadian colleagues her very effective program.

Hon. Pat Bell, then minister responsible for the file, came to the 2010 UBCM prepared. If the Canadian effort wasn’t effective until then it appeared the province was finally behind local governments and they were motivated to solve the issues. The provincial-federal response was to create a multi-jurisdictional working group with local government staff. No politicians, just bureaucrats.

Before anyone could get too excited, amid growing uncertainty around Premier Gordon Campbell’s leadership, he shuffled his cabinet just a few weeks after the 2010 UBCM. The “momentum” generated by Minister Bell was lost, and issue became a lesser priority.

Meanwhile the problems on the water continued to get worse. Both governments knew of solutions, they were provided clear examples of successful programs across North America and even their own MP’s and MLA’s were on record with solutions.

Senior governments want the social and political license to push pipelines across British Columbia to the coast. Yet, when it comes to the nagging marine issues such as derelict vessels, or more generally, marine pollution, surprisingly the efforts to earn the license have been invisible.

Had senior governments drafted legislation to manage derelict vessels as quickly as they created a framework for “world-class” oil spill response, perhaps the people of BC would be more willing to lend them the political capital they so desperately desire.

Fixing the problem isn’t difficult - there are examples of success all around - finding the political will is. Rather than talk “world-class”, senior governments have had plenty of opportunity to walk “world-class” and utterly failed. No wonder public confidence is low.