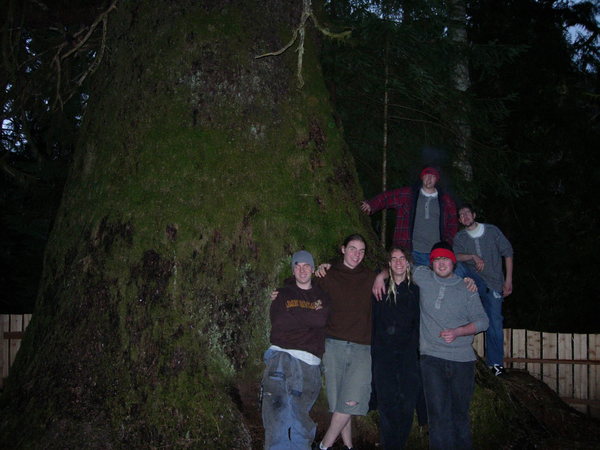 When I was young, my parents would always take me up to see Cathedral Grove. I marveled at the trees and the lead-up to it was one of the few sections of highway I could always anticipate. The one thing I couldn't anticipate was how tiny it made me feel. To this day, the size of the trees there unfailingly fills me with awe every time I see them. But I always thought that was a special place and that those trees were the only ones like that standing in the world. Then one weekend as a late teenager, my dad took my brother, cousin, a few friends, and I on a 4-bying road trip around the island. We did all the typical redneck things: had a giant fire with gasoline, built a bridge around a gate to drive up a mountain, blew things up with firecrackers, chainsawed fallen trees, we're irresponsible with firearms, and nearly crashed our vehicles. But one thing that stood out on that trip to me was the one point of irreverence we all had when at some point driving down the backroads, my dad had us all pull over and walk a bit into the woods. I thought he was just taking a bathroom break, but there in front of us was one of the largest trees I'd ever seen in my entire life. It would have dwarfed half the trees in Cathedral Grove, I thought. I didn't understand. "I thought there were only trees like this in Cathedral Grove," I told my dad. We tried to link arms around it. All seven of us couldn't. My dad responded to my statement "No son, these trees used to grow everywhere on the island. People cut them down. There are still some around like this but they're still being cut down." I was distraught. "Why? Why not just take a bunch of smaller trees?" He answered that you could get more straight wood out of the giant trees, and explained that this one was probably still standing because it would probably explode when it was felled. My dad, a redneck a heart, an ex-logger, and a businessman who at one point had told me that climate change didn't matter to him, was heartbroken and furious that old growth was being logged still. The fact that the NDP promised to stop logging old growth and have continued as the BC Liberals is the deepest erosion of public trust I can imagine. This is our home and it's being taken from us.